I then went on to my dance training with a scholarship to Rambert Ballet School in 1965,
where I had the privilege of being taught by the lady herself, Madame Rambert, at the Mercury Theatre in Notting Hill Gate. When London Contemporary Dance Trust began offering part-time classes taught by Graham Company Dancers, I was one of the first to enrol. After London Contemporary Dance School opened in 1966, I taught the new students. I continued with what was then known as the London Contemporary Dance Group during 1967/68. In 1969 I became a founder member of London Contemporary Dance Theatre. I then remained in the company for eighteen years, touring globally and working with the renowned choreographers of the time including Robert Cohan, Alvin Ailey, Anna Sokolow, Robert North, Talley Beattie, Richard Alston and Siobban Davies. I am also acknowledged as being a founding member of the Place. I was the first black dancer to be employed by a British dance company.

My own work, the Bronze, was taken into LCDT repertoire in 1975, in 1977 I staged Robert
North’s legendary Troy Games for the Dance Theatre of Harlem in New York. Since the sad demise LCDT, in 1985 I focused my attentions on teaching, and became a founder member of the Northern Contemporary Dance School teaching staff for fifteen years . As a freelancer I was appointed first rehearsal director at Phoenix Dance Company in Leeds and have also worked in the same capacity of Mavin Khoo. Now London based, I worked as a guest teacher at Millennium Dance 2000 with other ongoing freelance teaching at Middlesex University and for Shobana Jeyasingh Dance Company. In 2003 I was appointed as Associate Artist for Adzido. I appeared in a self-Choreograp hed solo work, Missing, at the Summer Collection, Clore Studios, Royal Opera House, London, July 2004, and also at the Edinburgh Festival for two weeks 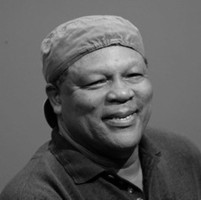 As a part of my 50th year celebration, I am offering a programme of master classes, workshops, rep, discussions related to my dance career and a short Solo Performance.

I am available for 1 day, 1 week, or 2 week residencies. Other arrangements may be possible, visit the CONTACT ME page to find my contact details.